- October 12, 2020
The EX Boyfriend
By: Rona Halsall
297 Pages
Published September 30, 2020
Bookouture
Source: Net Galley
Note:  I received this book directly from the publisher via Net Galley to facilitate my review. All opinions are my own and I received no other compensation. 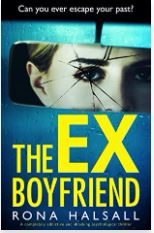 Synopsis from GoodReads:
He promised to love her until her dying day…When Becca’s first love shows up on her social media feed, she can’t help but smile fondly. Once upon a time, Connor was the love of her life, and though it was over ten years ago, he’s always held a place in her heart.Then he sends her a message. He sounds happy – still kind and funny, still living across the world in Australia. But he wants to know everything about her life now. How can Becca tell him the truth? About her workaholic husband, her stressful job, and the challenges of caring for her elderly father and her longed-for, adorable but exhausting three-year-old daughter Mia?Becca hesitates, knowing she shouldn’t even reply. But Connor lives on the other side of the world. Just how dangerous can becoming friends again be?It feels harmless. Until Mia gets sick – in a way that no one can explain. And it starts to become clear – someone will do absolutely anything to make sure Becca never escapes her past.

This is my first Rona Halsall book, and it will not be my last! I, like other reviewers, began this book thinking it was about one thing only to learn the betrayal is much deeper.  Becca and Dean are married and after years of trying to have a child and multiple miscarriages, they have Mia.

Dean meanwhile is doing everything he can to build his business and create a future of financial freedom which leaves Dean extraordinarily little time to truly talk to his wife.  Becca meanwhile is overwhelmed with balancing her career while essentially being a single mom.

Becca's life to the outside world appears perfect until someone awfully close to her decides to use her past against her and her world begins crumbling around her.

When out of the blue, Connor, Becca's flame with unfinished business prior to Dean contacts her via social media.  Feeling a bit nostalgic for life before becoming a wife and mother she thinks, what harm is there catching up? Quickly Connor, the commitment-averse man, becomes needy.  Sensing this is not the Connor she knew; Becca reaches out to him and finds out he is not on social media.  If he is not on social media, who has been contacting her? The plot thickens.

To avoid giving any spoilers away, I highly recommend this book to anyone who loves a solid psychological thriller.  The book was a little slow for me toward the middle but not so much that I disengaged.  There were so many twists and turns, I found myself needing to know how this story ended and who was responsible for turning Becca's world upside down.  I can honestly say, I did not anticipate who the culprit(s) were.