BOOK REVIEW AND TOUR - Murder At The Mill by T.A. Belshaw

Murder At The Mill

January 1939 and the residents of the snow-covered streets of a small Kentish town awake to horrific news.

When young Amy Rowlings meets Detective Sergeant Bodkin at the scene of a robbery on the way to work at The Mill, one snowy, January morning, she is blissfully unaware of how much her life is about to change.

She is drawn into the murky world of murder when the body of Edward Handsley is found lying on the floor of the clothing factory. Edward, a libertine, philanderer, the son of George, the factory owner, a young man with many enemies, many of them female.

Bodkin is new to the area and accepts Amy’s offer to provide local knowledge, but she soon becomes an invaluable source of information. When Adam Smethwick is arrested for the murder, Amy, a family friend, is convinced of his innocence and sets out to prove that the detective has arrested the wrong man.

Amy befriends Justine, the young, French fiancé of the elderly George, and soon discovers that it was not all sweetness and light in the Handsley family home. Meanwhile, back at the factory, Amy is sure that the foreman, Mr Pilling, has something to hide.

As the investigation proceeds, Amy finds that her burgeoning relationship with Bodkin is pushed to the limits as the detective becomes even more convinced that he has arrested the right man and while Bodkin relies heavily on the facts as they are presented, Amy has a more nuanced approach to solving the crime, born out of her beloved Agatha Christie books

Murder at the Mill is the first book in a gorgeous 1930's cosy crime series.

AMY RETURNS! - Death at Lychgate: the second Amy Rowlings book is out Christmas 2023.

What a fun read! Books with strong feminine lead characters at a time when they were to be "seen and not heard' are amongst my favorite reads. I love their tenacity as they push limits and embrace the consequences. I'm also realizing how much I love a good cozy mystery.
The cast of characters are genuine and hard not to enjoy. The personalities blend well, and the story is well paced. The twists and turns kept me engaged from start to finish. Just when I thought I had figured it out, another twist was thrown in and truly enjoyed the surprise at the end.

I love this new series and can’t wait to see how this series unfolds.

I received an advance review copy for free, and I am leaving this review voluntarily. Thank you T.A. Belshaw, SpellBound Books, and Zooloo's Book Tours. I'm excited to be a part of this tour. 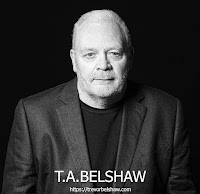 T A Belshaw is from Derbyshire in the United Kingdom where he shares a house with his chatty rescue cat, Mia. He writes for both children and adults. A former miner and computer technician, Trevor studied Advanced Creative Writing at the Open University. He is the author of Tracy's Hot Mail, Tracy's Celebrity Hot Mail and the noir, suspense novella, Out of Control. Following the sudden death of his wife in 2015 Trevor took a five-year break from writing, returning during lockdown in 2020, when an injury forced him to take time off work. The result of this new creative burst was the Dual Timeline, Family Saga, Unspoken and the Historical Cosy Crime Whodunnit, Murder at the Mill.

Trevor signed his first contract with Spellbound Books Ltd in April 2021. He signed a further multi-book contract with them in the spring of 2022.

His short stories have been published in various anthologies including 100 Stories for Haiti, 50 Stories for Pakistan, Another Haircut, Shambelurkling and Other Stories, Deck the Halls, 100 Stories for Queensland and The Cafe Lit anthology 2011, 2012 and 2013. He also has two pieces in Shambelurklers Return. 2014

Trevor is also the author of 15 children's adventure books written under the name of Trevor Forest.

His children's poem, Clicking Gran, was long listed for the Plough prize (children's section) in 2009 and his short poem, My Mistake, was rated Highly Commended and published in an anthology of the best entries in the Farringdon Poetry Competition.

Trevor's articles have been published in magazines as diverse as Ireland's Own, The Best of British and First Edition.

He is currently working on the sequel to Murder at the Mill, another cosy crime murder mystery set in 1939, Death at the Lychgate.