Here is a collection of true crime stories from different countries and time periods that defy simple description. They include:

The assassination attempt on John F. Kennedy you never heard about but which very nearly succeeded.

George Stinney, the fourteen-year-old child who died in the electric chair for a crime he didn’t commit.

Joseph Vacher, the “French Ripper” whose crimes shocked France but tried to blame it all on the rabid dog that bit him.

Leonarda Cianciulli, the Corregio “Soapmaker” who killed three women as a sacrifice to protect her own children.

These stories, and more, are all featured here making this book a must for any connoisseur of true crime and bizarre justice.

I LOVE crime stories and probably spend way too much time watching tv shows about them. Because of this, I jumped at the chance to read and review this book. This is an exceptional collection of some of the most intriguing crimes committed over the past 200 years or so.

The stories in this book kept me engaged from start to finish because I wanted to know how the case ended. I also delighted in the gruesome details because I find myself wondering, “what kind of a person does this?” Some of these cases are well known while others were new to me. Some handled well, others not so much. The author did a good job of balancing the facts while telling the stories. I look forward to more from this author!

I received an advance review copy for free, and I am leaving this review voluntarily. Thank you Romeo Vitelli and Travelling Pages. I'm excited to be a part of this tour. 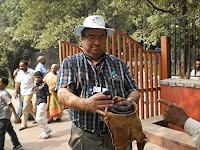 Romeo Vitelli received his doctorate in Psychology from York University in Toronto, Ontario in 1987. He spent 15 years as a staff psychologist in Millbrook Correctional Centre, a maximum-security prison run by the Ontario government. In 2003, he went into full-time private practice and has been an avid blogger since 2007.