Knitting nerd Sarah Redmond is always the new girl, never the popular one.


Moving all over the country with her flighty mom seemed to be her lot in life, but her junior year at Sierra Vista High School feels like it could be different.

She's finally on the verge of a social breakthrough.

But when she gets publicly punked at her first party, she and her new friends find a creative way to use their shared obsession with knitting to exact sweet revenge.

And when their efforts lead to a lucrative business, Sarah knows she's set.

But when her deadbeat dad comes back around she starts to wonder if she should try for a different life, instead of following the paths her parents have chosen.

But is that something a girl like her can really make happen?

To cope, I did what any reasonable person would have done—I holed up in my room after work and started a new series of knitted weapons. First I made a dagger because it seemed simplest, but it still took me a while. I stabilized it with cardboard from a cereal box.

Naturally, I recorded how to make it. I even demonstrated what I’d like to do with the dagger. Stabbity stab stab.

Screw everybody at school. My thousands of subscribers thought I was cool. There were more of them than students at the school.

Of course, the comments exploded with trolls from school, with things about my contortionist face. Which, again, was so stupid. Some of my regular followers were flip‐ ping out and fighting back. One of them said, “Do you know who you’re making fun of?” like I was a big-time celebrity. Someone else said, “I’d like to see *you* make a giant celeriac!” That cracked me up. Still, I had to turn comments off on my whole channel because of all the trolls, which sucked.

A couple days later I was called into the principal’s office. Mr. Peterson—a middle-aged balding man—gave me this stern look when I got there. I had to wait for my mom in this tacky and squeaky wooden chair with frayed blue fabric arms. My stomach was roiling while I waited, because I had no idea what was going on, and I’d never been in trouble before.

We went into his office, where they had matching wooden chairs.

Always the New Girl is a coming-of-age story about Sarah Redmond as she adjusts to another school as her mom moves from relationship to relationship. It’s safe to say that high school is difficult for everyone, add in bullying, finding your people, and dealing with the instability that is her mother can easily overwhelm any teenager. Sarah is not shrinking violet but must overcome her trust issues to become the person she knows she can be.
The story is broken into segments and is easy to follow. I empathize with Sarah and her insecurities while cheering her on. I love that she broke away and found her people in her new friends. The characters are believable and easy to like despite their shortcomings and poor choices. I look forward to reading more from this author.

I received an advance review copy for free and am leaving this review voluntarily. Thank you Kelly Vincent and Goddess Fish Promotions. I'm excited to be a part of this tour. 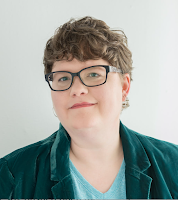 Kelly Vincent wrangles data weekdays and spends the rest of her time playing with words. She grew up in Oklahoma but has moved around quite a bit, with Glasgow, Scotland being her favorite stop.

She now lives near Seattle with three cats who help her write her stories by strategically walking across the keyboard, with her first novel, Finding Frances, a fine example of this technique. She has a Master of Fine Arts in creative writing from Oklahoma City University’s Red Earth program.