BOOK REVIEW AND GIVEAWAY - Island of Dreams by Harry Duffin

In May 1939, when Professor Carl Mueller, his wife, Esther, and their three children flee Nazi Germany, and find refuge on the paradise island of Cuba, they are all full of hopes and dreams for a safe and happy future. But those dreams are shattered when Carl and Esther are confronted by a ghost from their past, and old betrayals return to haunt them.

The turbulent years of political corruption leading to Batista’s dictatorship, forces the older children to take very different paths to pursue their own dangerous dreams. And - among the chaos and the conflict that finally leads to Castro’s revolution and victory in 1959, an unlikely love begins to grow - a love that threatens the whole family. Having escaped a war-torn Europe, their Island of Dreams is to tear them apart forever.

Freddie stopped the car in the path, and watched Anna get out.

‘Can you get out, please, Freddie,’ she said quietly.

Very curious, Freddie got out. Anna came and stood in front of him. She looked around, then taking his arm, she led him into the forest. Freddie was very puzzled now. Did she think he might go back and tell the police where the camp was? Surely, she knew he wouldn’t do that? She led him to a clearing, out of sight of the path.

‘You don’t think I’m going to go back and tell the army where the camp is, Anna?’

‘Is that what you think?’

Freddie shrugged. He had given Anna his gun in the car.  ‘You’ll need it more than me,’ he’d said. Not that he would use it on her anyway.

Anna came close to him. As he was about to speak again, she put her fingers to his lips. ‘You don’t know, do you?’ she said.

She reached up and pushed a lock of his hair back from his forehead. ‘Freddie, I hated you from the moment you picked me up and dragged me off the boat.’

Then her fingers ran softly down his cheek. ‘And loved you just as much.’

Before he could speak her lips met his. It was a long kiss. Twenty years in the making.

I received an advance review copy for free and am leaving this review voluntarily. Thank you Harry Duffin and Goddess Fish Promotions. I'm excited to be a part of this tour. Now onto my review! 😀

In Island is an intriguing story about the Mueller family as they flee Germany and find refuge in Cuba during the Cuban Revolution. We meet Dr. Mueller and his family as they move to Cuba with hopes for a new start. I enjoyed learning the backstories of each family member.

The plot of this book is interesting to me and had me hooked from start to finish. I enjoyed the writing style and found it easy to read. The book is fast paced, full of tension and gives the reader insight into what it was really like to live during this time. The characters are brilliantly written, and I enjoyed the family dynamics between each character. The descriptions of Cuba and Germany are so well described that I could picture the setting in my mind’s eye.

I highly recommend this book to anyone who loves historical fiction with an international flair. The aspect added depth to the story and made for a compelling read. I look forward to reading more from this series and see how it unfolds! 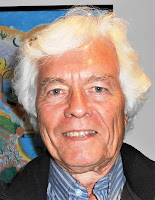 Harry is an award-winning UK screenwriter, who won the Writers’ Guild Award for Best TV serial, while writing for Granada Television’s ‘CORONATION STREET’. Before that, in 1985, he was on the first writing team for the BBC’s ‘EASTENDERS’.

Before beginning his career writing drama for television, Harry spent a dozen years working in British theatre, as stage manager, writer, designer and director, working with actors such as Nigel Hawthorne, Anne Reid and Lesley Manville.

After script-editing the BBC’s HOWARDS’WAY, he freelanced for series like DISTRICT NURSE, THE BILL, BOON, THE BRETTS, EMMERDALE.

In 1994 he became Head of Development at the UK independent company, Cloud 9 Screen Entertainment. As the script executive he was responsible for seven major television series, included ‘SWISS FAMILY ROBINSON’ starring RICHARD ‘JOHN BOY’ THOMAS, and ‘TWIST IN THE TALE’, featuring WILLIAM SHATNER. He also wrote the film, RETURN TO TREASURE ISLAND.

In 1998 he was the co-creator of the UK Channel Five teen-cult drama series ‘THE TRIBE’, which ran for five series, numbering 260 episodes. ‘THE TRIBE’ has been sold world-wide, and all series is on YouTube.

His first novel, CHICAGO MAY, is the first book of a two-part series.  He has also written JAIL TALES, about his wife’s 20 year career in the prison service, and the novel BIRTH OF THE MALL RATS, the prequel to THE TRIBE.

He has just finished his third novel, ISLAND OF DREAMS, to be published on December 1st 2022.

Harry Duffin will be awarding a $30 Amazon or Barnes and Noble GC to a randomly drawn winner via rafflecopter during the tour.