BOOK REVIEW AND $10 Gift Card GIVE AWAY - And the Devil Walks Away by Kevin R. Doyle

And the Devil Walks Away

Helen Lipscomb seemingly has nowhere to go but down. Cashiered from the force, ostracized by most of her former acquaintances, and with no real connections left to the community, she's been getting by as a sort of unofficial investigator, doing piecework for various lawyers and bail bondsmen. Her former life as a homicide detective seems far behind her until a notorious serial killer, locked away and facing the death penalty, offers her the challenge of a lifetime. Not to prove his innocence, but to prove him guilty of even more murders than the authorities suspect, murders for which another convicted man, several states away, is taking credit.

“Huh?” The beginnings of a headache developed as she tried to follow the lawyer’s logic.

“Every day that we’d spend in motions, hearings, or actual trial, were we to get so lucky, would be one extra day that Mr. Benson’s part of the news. Do you have any idea what the publicity of the last few years has done to his various companies’ stock valuations? Not to mention their overall bottom line?”

“I get it,” Helen said, leaning back in the chair. “Don’t want the entire thing to go down the rabbit hole, right?”

“You’re not going to try to get him out at some point, are you?” she asked.

“I would if I could,” Conroy said, “and please don’t look so shocked. You know how the game’s played as well as anyone. Probably better than most. It’s my job to get my client the best deal I can. Even so,” he shook his head, “some sort of freedom, any certain number of years, would be too much even for me to pull off. No, Leo Benson, minus all his billions of dollars, is going to spend the rest of his life, however long that may be, in either this prison or one very similar.”

“So what you’re after is getting rid of the death penalty,” Helen said.

Conroy nodded. “Both here and, if it ever gets to that, in Colorado. And that’s where you come in.”

I received an advance review copy for free and am leaving this review voluntarily. Thank you Kevin R. Doyle and Goddess Fish Promotions. I'm excited to be a part of this tour.

Earlier this month I read Double Frame which is part of his Sam Quinton series. That book was SO good, I jumped at the chanced to read another series from a phenomenal author and I am not disappointed!

And the Devil walks away is the third the authors “The Group” series. As I often do, I find I’ve jumped into another series versus starting with the first book. The good news is that this book works well as a standalone. The book is well written with an eclectic cast of characters that really make this book.

Crime procedurals and psychological thrillers are two of my favorite genres. Because the book is written this way, it is easy to read and moves quickly. I absolutely love that the book pairs a failed police detective pairing up with a serial killer to prove he is guilty of more crimes. I can’t say I’ve read very many books where the killer isn’t claiming innocent thus, I was intrigued.

This book flows from one genre to the other and back flawlessly. I was engaged from start to finish and had trouble putting this one down. The setting is described so well, I felt like I was a part of the story as I read along. Full of plot twists and turns you won’t see coming, this book is hard to put down. When I was done, I wanted more!

Overall, I recommend this book and I will be circling back to books 1 and 2 while awaiting the next installment in this series. I look forward to seeing how our main character grows and develops.
Overall Rating: 🌟🌟🌟🌟 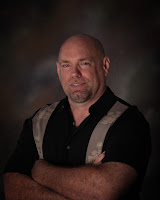 holds a bachelor’s degree in English and a master’s in communications, both from Wichita State University. While he spent several decades writing short stories, mainly in the horror field, for a variety of small press publications, in the last eight years or so he’s moved into longer works in the genres of crime, horror and rock fiction.

In the horror field, in 2015 Night to Dawn Magazine and Books released his novel, The Litter and in 2022 will release a new mystery novel, The Anchor.

Kevin R. Doyle will be awarding a $10 Amazon or Barnes and Noble GC to a randomly drawn winner via rafflecopter during the tour.