BOOK REVIEW - The Low Road by Jo A Hiestand

by Jo A Hiestand

Former police detective Michael McLaren arrives in Scotland, ready to immerse himself in the fun of the Highland Games and to enjoy a holiday with Melanie. But the old saying of plans oft going awry rears its ugly head: Simon Shaw, a member of McLaren's folk group, dies. Murdered a year to the day following his uncle's death.

McLaren is determined to find out who killed Simon. Needing justice for his friend is only half of his incentive. He also needs to appease his guilt for suggesting the group sing there in the first place.

As McLaren becomes immersed in the investigation, he wonders if the two deaths are linked, or have to do with the family or their clan. Perhaps Simon's former wife killed him, bent on revenge more powerful than mere divorce. Or was the killing tied to an old hunt for diamonds? After all, diamonds aren't only a girl's best friend. Sometimes they birth greed and murder. And entrap the innocent.

The last vestiges of sunset touched the sky, the violet and indigo hues slowly turning to a somber grey that would soon melt into the thickening gloom. Dusk was yielding to the darkness that brought out night creatures and their sounds, but the piper seemed apart from that, like Melanie's blend of the Mystical and Celtic worlds. What is he doing here and where is he now? For the music again had shifted. It now came from behind the house, apparently on the road.

McLaren tapped on his mobile phone's torch app and played the beam several feet ahead as he jogged toward the sound. The grass brushed the sides of his boots in dry, wispy sighs. Dew would anoint the lawn, yews, and the cars come morning, but at this hour it was an easy tramp without the entanglement of sodden grass. It's just as well, he thought as he approached the verge of the road. I can do without damp boots and jeans.

As he left the lawn and stepped onto the gravel edge of the road, the music stopped. Not abruptly, as if someone had hit the pause button on a recording. It groaned and lost its voice. Like a last gasp, the way bagpipe music ended with the air leaving the bag. The silence was nearly overwhelming after the lengthy skirl he had heard. The timing was strange too, as if the crunch of his boots on the chert had signaled to the piper that McLaren was there to find him.

I received an advance review copy for free and am leaving this review voluntarily. Thank you Jo A Hiestand and Goddess Fish Promotions. I'm excited to be a part of this tour.

Yep, I’ve done it again! I’ve jumped into another series mid-way through. The Low Road is the 16th in The McLaren Mysteries series. The good news is that this book works well as a standalone. I didn’t feel like I was missing out. I enjoy a good police procedural book and this one did not disappoint.

In this installment, police detective Michael McLaren arrives in Scotland, ready to immerse himself in the culture and enjoy his holiday with Melanie. When murder strikes, Michael is determined who figure out was responsible.

This book has it all drama, red herrings, and twists you won’t see coming. The writing style flows easily, and I love reading about how the police operate in different countries. The characters are engaging and well written. The supporting cast of characters add depth that had me wanting to know more about them.

The setting was well described I felt like I was experiencing the story with the characters. I also like the level of detail. It is clear the author understands how investigations work. I had trouble putting this book down and stayed up too late reading because I had to know who ended. I’ll be circling back to catch up and look forward to the next installment! 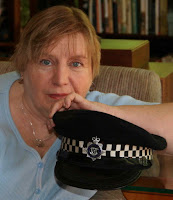 Jo A. Hiestand grew up on regular doses of music, books, and Girl Scout camping. She gravitated toward writing in her post-high school years and finally did something sensible about it, graduating from Webster University with a BA degree in English and departmental honors. She writes a British mystery series (the McLaren Mysteries)—of which three books have garnered the prestigious N.N. Light’s Book Heaven ‘Best Mystery Novel’ three years straight. She also writes a Missouri-based cozy mystery series (The Cookies & Kilts Mysteries, of which "A Trifling Murder" is the second book) that is grounded in places associated with her camping haunts. The camping is a thing of the past, for the most part, but the music stayed with her in the form of playing guitar and harpsichord, and singing in a folk group. Jo carves jack o’ lanterns badly and sings loudly. She loves barbecue sauce and ice cream (separately, not together), kilts (especially if men wear them), clouds and stormy skies, and the music of G.F. Handel. You can usually find her pulling mystery plots out of scenery—whether from photographs or the real thing.

Jo A Hiestand will be awarding a $25 Amazon or Barnes and Noble GC to a randomly drawn winner via rafflecopter during the tour.